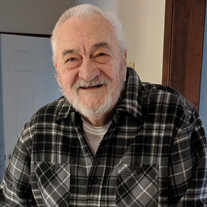 Walter D. Valovage Sr., 93, of Bethlehem, PA passed away on Thursday, February 11, 2021 at Fellowship Manor in Whitehall, PA. Born in Hazleton, PA he was the son of the late Walter Martin and Helen (Miczkosky) Valovage. Walter graduated from Bethlehem (now Liberty) High School in 1945 and then enlisted in the United States Navy, serving his country during World War II. After an honorable discharge from the Navy, Walter attended Lehigh University. He married Pauline Hageter in 1949 and they shared 34 years of marriage. In 1952 he graduated from Lehigh with a Bachelor of Science degree in Metallurgical Engineering and began a lifetime career with General Electric Company. Walter enjoyed attending Lehigh wrestling meets, traveling, visiting with family and friends, and was an avid reader. He also enjoyed playing in the 540 Democratic Club Quoit League in Bethlehem. He was a member of The Grover Cleveland Club, The Jefferson Club, and The Wanderers in Bethlehem. Walter will be lovingly remembered by his children: Walter D. Valovage, Jr. and his wife, Deanna, of West Fargo, ND; Barbara Yener of North Chesterfield, VA; Edward Valovage and his wife, Maureen, of Memphis, NY; Nancy Dingman and her husband, Bill, of Lansdale, PA; Vincent Valovage and his wife, Nora, of Lykens, PA; and David Valovage and his wife, Lori, of Harleysville, PA; 19 grandchildren; 15 great grandchildren; and many nieces and nephews. In addition to his parents, Walter was preceded in death by his sister, Irene Sikora, and her husband John. Services will be held at the convenience of the family at a later date. Memorial contributions may be made to Lehigh University, Lehigh University Information Processing, 306 South New Street, Suite 500 Bethlehem, PA 18015 or online at https://giving.lehigh.edu/.

Walter D. Valovage Sr., 93, of Bethlehem, PA passed away on Thursday, February 11, 2021 at Fellowship Manor in Whitehall, PA. Born in Hazleton, PA he was the son of the late Walter Martin and Helen (Miczkosky) Valovage. Walter graduated from... View Obituary & Service Information

The family of Walter D. Valovage created this Life Tributes page to make it easy to share your memories.

Send flowers to the Valovage family.