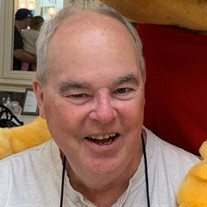 William Francis Joseph Wright Sr. passed away Saturday 8/29/2020 in St. Luke’s Hospice surrounded by his family. He and beloved wife, Sharon (Post) Wright, were married for 52 years. Born October 20, 1947 in St. Luke’s Hospital, Fountain Hill, PA. He was the son of the late Robert Leo Wright and Catherine P. (Coll) Wright. As a youth, Bill participated in organized sports including football, baseball and wrestling in leagues and schools in the Bethlehem area. He was also Boy Scout. Growing up he was also active with St. Anne’s Church. He was a graduate of Liberty High School in Bethlehem, PA. He then enlisted and served in the Navy from 1966 to 1976 during the Vietnam War, active November 1967 to December 1968. While in the Navy, Bill served as a damage control man assigned to the USS Puget Sound AD38 with ports of call in both the Pacific and Atlantic. Bill returned to the Lehigh Valley and worked for 24 years at Bethlehem Steel Corporation in the Transportation department where he developed systems for logistics management. After leaving Bethlehem Steel in 1994, he joined what would eventually become T-Mobile as a safety inspector of proprieties, with responsibility for the New York City and surrounding areas of mobile transmission sites. Bill continued his commitment to service in 1975 starting as a volunteer firefighter for Hecktown. He then advanced his work as a first responder by eventually helping to pioneer Advanced Life Support (ALS) service as a founding member of the the Medic I project, a non-transport paramedic response service that served 10 volunteer EMS agencies and also as the elected Captain of Hecktown Volunteer Ambulance Corps serving Lower Nazareth Township. He became one the first trained paramedics in Eastern PA in 1982. He was also instrumental in developing a unique response management service known as TEAMS which allowed small communities to continue to collectively provide EMS at a time when volunteers were declining. He also assisted as a consultant to agencies who were starting ALS service. Bill led the design, fund raising and construction approval efforts for the building of a modern Hecktown Vol Amb Corps facility in 1996. He continued his community service with Hecktown Ambulance until 2006. During his 31 years of emergency service participation, Bill literally responded to thousands of emergency calls day and night, many times with his wife, Sharon who was also a nurse/paramedic. As a pre-hospital, emergency care provider he assisted in the care of countless people at the most desperate moments in their lives. Bill and his wife enjoyed many years exploring and enjoying all that Disney and Walt Disney World had to offer. They liked to joke that all things Disney was the one thing they completely agreed upon. In addition to his wife Sharon, he is survived by, and will be deeply missed by, his three children and spouses: Elizabeth P. (Wright) Gulick and husband H. Gregory Gulick, William F. Wright Jr and his wife Sherry (Sebek) Wright, Michael P. Wright and his wife Joanne (Kim) Wright; his brother Robert L. Wright and wife Karen, and sister Patricia Albertson; grandchildren Jacob, Elyse, Zachary, Will, Grace, Aidan, and Cooper. In addition to his parents, who predeceased him, he is predeceased by his infant grandson, Connor. A viewing will be held on Wednesday, September 2, 2020 at Connell Funeral Home 245 E. Broad St., Bethlehem, PA 18018 from 6-8 PM. (Masks are required and funeral occupancy will be limited). Mass of Christian Burial will be held on Thursday, September 3, 2020 at 11 AM at St. Anne’s Roman Catholic Church, 450 E. Washington Ave., Bethlehem, PA 18017. Burial will follow at Holy Saviour Cemetery. Memorial Contributions may be made in Bill’s name to the Gary Sinise Foundation, PO Box 368, Woodland Hills, CA 91365.

The family of William "Bill" Francis Wright created this Life Tributes page to make it easy to share your memories.

Send flowers to the Wright family.