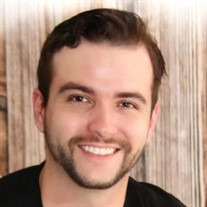 It is with great sadness that we announce the unexpected passing of our beloved son, Zachary Ashton Zerfass on June 14, 2020. Zachary was 28 years young and loved his family and friends, Philadelphia sports and his chosen career path in the fast-paced auto industry. Zachary was a loving son and best friend to his mother, Dolores Zerfass, of Nazareth, Pennsylvania and his father, Chris Zerfass and step-mother Ariane Zerfass, of Nazareth, Pennsylvania. In addition to his parents, Zachary is survived by his siblings: Michael Dunne-Zerfass (Leanne), Christopher Zerfass (Meghan), Richael Stoltz (Cody) and Justin Zerfass. He is also survived by his two nephews Michael Reiss and Jaden Dunne-Zerfass, and the soon to arrive Baby Z. Zachary brought so much love and joy to our lives and to those who were around him. He was always known for his beautiful smile. He was employed at Colonial Volkswagen Subaru as a Solution Specialist. During his time at Colonial, he blessed many of his co-workers and customers with his beautiful soul, friendly handshake and ear for listening. He was passionate about his career with the determination to learn all he could. From his young teenage years through his adult years, Zachary AKA “Gator” loved playing paint ball, semi-professionally with his team, Wolfpack. He traveled the states playing in tournaments, feeling every drop of sweat, sting and rush that came from his beloved sport. Like his Mother, Father and siblings, Zach was an avid Philadelphia sports fan, but nothing compared to his love for the Philadelphia Eagles- he bled green. We can still vividly see all the screaming, jumping and crying as they became Superbowl LII Champs. Zachary’s undying love for animals emphasized his beautiful soul. He always made time for his kittens and puppies while they slobbered him with kisses and hugs. In addition to his parents and siblings, he is survived by his Aunts and Uncles, Teri Maco (Bruce), Doni Binczak (William), Dwight Musselman, Great Uncle Gregory Bartos (Cathy), and many cousins, family members and friends. Zachary will always be remembered for his gentleness, compassion, and kindness toward others. He always looked after others and put others before himself. Zachary was predeceased by his maternal grandmother Lorraine Mucklin (Robert), maternal grandfather Emanuelle Rizzuto, paternal grandmother Jacqueline Kibler, paternal grandfather Joseph Zukosky Jr. (Pop), Aunt Madeline Loveless (Donald), Great Uncle William Wisniewski and Great Aunt Francine Pucillo (Arthur). Zachary recently celebrated 15 months of sobriety. He fought fiercely and fearlessly and is now at peace with our Lord. In lieu of flowers the family respectfully requests donations be made in Zachary Zerfass’ name to Independence Lodge LLC, PO Box 331, Langhorne, PA 19047 John 3:16 For God so loved the world that he gave his one and only Son, that whoever believes in him shall not perish but have eternal life. Services will be held on Saturday June 2oth, at Saint John’s Lutheran Church, 200 S. Broad St., Nazareth, Pa 18064 Public Viewing: Calling hours 12-2pm (or until everyone is through) Private Funeral following at 2pm

It is with great sadness that we announce the unexpected passing of our beloved son, Zachary Ashton Zerfass on June 14, 2020. Zachary was 28 years young and loved his family and friends, Philadelphia sports and his chosen career path in the... View Obituary & Service Information

The family of Zachary A. Zerfass created this Life Tributes page to make it easy to share your memories.

It is with great sadness that we announce the unexpected passing...

Send flowers to the Zerfass family.