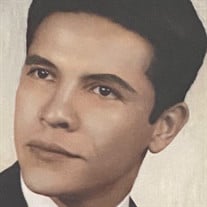 Carmelo V. Huertas, of Bethlehem, PA., died on January 12, 2021 at his home. Born on December 2, 1930, in Patillas, Puerto Rico, the son of the late Juan and Cruz (Cruz) Huertas. He was the husband of the late Anna B. Huertas of Bethlehem, PA., to whom he was married for 44 years. He was self-employed and owned and operated Ann’s Stop and Shop along with other businesses in Bethlehem, PA. He was a member of Holy Infancy Catholic Church, Bethlehem, PA. Mr. Huertas served in the U.S. Army as an intelligence officer and retired from the U.S. Army in July 1975. He served in this capacity throughout the continental US states, Korea, Panama, and Viet Nam. Mr. Huertas was awarded numerous commendations during his tenure with the US Army to include the Bronze Star. He also served as chairman of the Bethlehem Parking Authority and was an untiring advocate for the revitalization of south Bethlehem. An ardent supporter of education he pursued and was awarded a Bachelor of Arts degree from the University of the State of New York. He is survived by his son, Carmelo and his wife, Michelle; daughters, Mary Huertas and Betsy Huertas; brother, Felix; sisters, Saturnina Martinez, Frances Huertas, and Sofia Huertas; grandchildren, Elizabeth Huertas Hughes, Michael J. Huertas, Heather Cavallo, Keith Frank, Betzaida Garcia Huertas, Jose Ernesto Garcia, Jose Javier Garcia, Katherine Garcia Huertas, and Milagros Huertas; and ten great-grandchildren. He was predeceased by his loving wife, Anna B. Huertas; son, Francisco; sisters, Libertad Buskirk, Lucia Gonzalez, and Petra Gonzalez; brothers, Lleyo, Chavelo, Pedro and Daniel Huertas; granddaughter, Katherine A. Huertas; and great-granddaughter Kelly C. O’Brien. A devoted husband, father, grandfather and great grandfather who believed that dying was part of living. He is eternally with us. We love you. A visitation will be held today, Thursday, January 14, 2021 from 12-2 p.m. at Connell Funeral Home. Another visitation will be held on Friday from 9-10 a.m. at Holy Infancy Catholic Church, followed by Mass of Christian Burial at 10 a.m. Entombment will take place at Holy Saviour Cemetery. Social distancing and masks will be required upon entry. A limited number of guests will be permitted in the funeral home at one time. Memorial contributions may be made to Wounded Warrior Project. https://support.woundedwarriorproject.org/Default.aspx?tsid=11585&ovr_acv_id=12177&campaignSource=ONLINE&source=BS20046AAABRX&gclid=Cj0KCQiA9P__BRC0ARIsAEZ6irhIcqtRHC05EbKeAZoECVS8UeB7qpAYDeNG6R2MSOAuKYu-iHO_LNYaAneREALw_wcB

The family of Carmelo V. Huertas created this Life Tributes page to make it easy to share your memories.

Send flowers to the Huertas family.