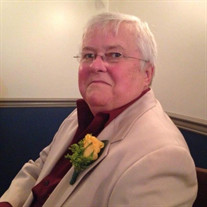 David M. Gawlick, 78, of Bethlehem, died on Monday, May 2, 2022, after a long and courageous battle with Parkinson's. Born on Halloween, October 31, 1943, he was the son of the late Leon and Mary Drugotch Gawlick. Dave and his wife Debbie would have celebrated their fifty-third wedding anniversary on May 3, 2022. Dave retired as Deputy Director of Administration of Northampton County in 2004. He was always interested in community affairs and actively involved in Democratic politics. He and his wife served as Bethlehem City Democratic Committee members for 30 years in the Ninth Ward, Third District. Earlier in his career, he served as an assistant to Pennsylvania State Representative William Rybak in Harrisburg. He spent 18 years at Bethlehem Fabricators, where he worked with the United Steelworkers of America local union’s Legislative and Organizing committees and as a Casual Staff Representative for the International United Steelworkers Union. He also worked at Durkee’s and for LANTA for a short time. He served as Treasurer to the William C. Rybak Handicapped Children’s Fund, volunteered for the Bethlehem City Live Christmas Pageant, was active with the Musikfest, Christmas City Fair, United Way, Elmwood Park Association, Salvation Army, Girl Scouts of America, Meals on Wheels, Lions Club, Northeast Middle School and Liberty High School Band Parents Associations. Dave loved his poodles, motorcycle rides, and yearly camping vacations at the Jersey Shore and in Maine. He could charm any stranger into an interesting conversation and made many lifelong friends that way. In addition to his wife Debbie, Dave is survived by his daughter, Marcie Gawlick Litak and her husband John, brothers, Norman (Lola) Gawlick, Leon Gawlick, and Charles Gawlick, sisters, Mary Posukonis and Carol Geiger, his godsons, Anthony Posukonis and William Geiger, and numerous additional nieces and nephews. A viewing will be held at the Connell Funeral Home, Inc., 245 East Broad Street, on Friday, May 6, 2022, from 9:30-10:30am. A Divine Liturgy will begin at 11:00am at Ss. Peter and Paul Byzantine Catholic Church, 1140 Johnston Drive, Bethlehem, PA. Interment will be in Holy Saviour Cemetery, Bethlehem. In lieu of flowers, please send donations to Michael J. Fox Foundation for Parkinson’s Research, Grand Central Station, PO Box 4777, New York, NY 10163-4777 or Peaceable Kingdom Animal Shelter, 1049 MacArthur Rd., PO Box 424, Whitehall, PA 18052.

David M. Gawlick, 78, of Bethlehem, died on Monday, May 2, 2022, after a long and courageous battle with Parkinson's. Born on Halloween, October 31, 1943, he was the son of the late Leon and Mary Drugotch Gawlick. Dave and his wife Debbie... View Obituary & Service Information

The family of David M. Gawlick created this Life Tributes page to make it easy to share your memories.

Send flowers to the Gawlick family.