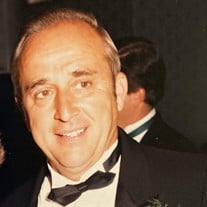 Francis L. Green, 91, of Bethlehem, passed away Saturday, November 20th at St. Luke’s Hospice. Born in Bethlehem, he was the son of the late Marie (Lieber) and Adam Green. He is married to Dorothy M. (Demyan) Green with whom he celebrated 65 years of marriage this past August 25th. Francis was the owner and operator of Fegley Steel Erectors. He proudly served his country in the United States Army during the Korean War. Francis was a former member of Saucon Valley Country Club, the Emmaus Senior League, an eight-year member of the Salisbury Township Zoning Board, and a longtime member of Holy Ghost Church in Bethlehem. He was an avid Philadelphia Eagles and Phillies fan. He enjoyed vacationing with the family at the Jersey shore and preparing the annual Christmas breakfast for all the grandchildren. Francis could always be found tending to his rose bushes with a cold beer nearby. He will be lovingly remembered by his daughter Judy and spouse Bob Nairn, daughter Sue and spouse Bill Komoroski, son David Green and spouse Karen; grandchildren Carly Gonzalez, Kevin Komoroski, Brian Gibson, James Gibson, Benjamin Green, Jennifer Farrell, Aaron Green; and great-grandchildren Hudson and Grace Gonzalez, Francie Mae and Grant Gibson, Tommy and Liam Gibson, Leo, Luna and Willow Green, Levi Farrell. A Private Service will be held on at Holy Ghost Catholic Church, 417 Carlton Ave., Bethlehem, PA 18015 On December 3rd. A memorial contribution may be made in Francis’ name to Holy Ghost Catholic Church.

Francis L. Green, 91, of Bethlehem, passed away Saturday, November 20th at St. Luke&#8217;s Hospice. Born in Bethlehem, he was the son of the late Marie (Lieber) and Adam Green. He is married to Dorothy M. (Demyan) Green with whom he celebrated... View Obituary & Service Information

The family of Francis L. Green created this Life Tributes page to make it easy to share your memories.

Send flowers to the Green family.