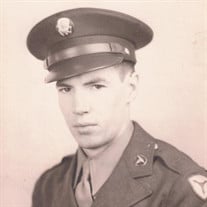 Francis C. Wagner, 98, of Fountain Hill, passed away peacefully in his home on Friday December 4, surrounded by his loving family. Born on July 1, 1922 he was the son of the late Mary (Carraghan) and Francis A. Wagner. He was the loving and devoted husband of the late Lucy V. (Catalanotti) Wagner. Together they shared 62 years of marriage. A World War II veteran, Fran proudly served his country in the United States Army Medical Corps. As a member of the Second Armored Division, he was part of four battle campaigns in Europe, including the Battle of the Bulge. A graduate of Fountain Hill High School and Rider college, Fran worked in the production scheduling department of the Bethlehem Steel, retiring in 1981 after 41 years of service. Fran enjoyed shad and trout fishing, found a new passion for golf after retiring, and liked to spend time in his yard and garden. He was a big fan of the old Philadelphia Athletics, following both the Phillies and the A’s in recent years. Fran always appreciated a lively business or political discussion as well as a good story – of course accompanied by a good cup of coffee. He will be lovingly remembered by his daughters, Patricia Gorzelic and her husband, Stan, Francene McIntyre and her husband, Jack and Jacqueline Devenney and her husband, Robert; son, John D. Wagner and his wife, Lynn; sister, Lucille DeMartin, and 9 grandchildren. Francis was preceded in death by his brother, James Donald Wagner, sister, MaryAnn Sandherr and grandson, Timothy Wagner. Francis was a lifelong member of St.Ursula’s Catholic Church in Fountain Hill. Due to current health concerns, it was Francis’s wish that services be held privately. In lieu of flowers, memorial contributions may be made to Allentown Rescue Mission 355 Hamilton St, Allentown, or to Easter Seals.

Francis C. Wagner, 98, of Fountain Hill, passed away peacefully in his home on Friday December 4, surrounded by his loving family. Born on July 1, 1922 he was the son of the late Mary (Carraghan) and Francis A. Wagner. He was the loving and... View Obituary & Service Information

The family of Francis C. Wagner created this Life Tributes page to make it easy to share your memories.

Send flowers to the Wagner family.