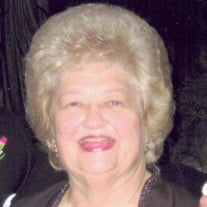 Gloria J. Weisser, 80, of Bethlehem, beloved wife, mother and grandmother, went to heaven peacefully on February 14, 2021 surrounded by her loving family. Gloria was born on May 21, 1940 in Pittsburgh, PA, the daughter of the late Jean (Wolczko) and Frank Popatak. She was the loving wife of Charles J. Weisser. Gloria graduated from Carrick High School in 1958. She married the love of her life on September 5, 1959. They started a family and moved to Allentown. Gloria was proud to be a housewife and devoted herself to raising her three daughters, Natalie, and her twins Lisa, and Leslie. She was a long-time member of Notre Dame Catholic church where she would often volunteer. After her daughters were grown, she began her 28-year career with Burger King Corp. working as a morning shift manager. Her beautiful smile and outgoing personality were cherished by her morning customers. She was widely popular and recognizable in the community. Her greatest joy was being an active grandmother to her six grandchildren. Gloria was a loved regular at all of her grandchildren’s special events including sports, martial arts, dance recitals and school functions. She was a proud Ukrainian who loved the beach and sitting at the edge of the ocean. More than anything, she loved spending time with her family, dancing, traveling, and listening to music as she was known as ‘The Dancing Queen’ by her grandchildren. She was an avid Pittsburgh Steelers, Penguins and Pirates fan and waved her Terrible Towel while watching them on T.V. She also loved her trips to the area casinos making, as she called them, “little donations”. Gloria had a big smile, infectious laugh and gigantic heart. She was a blessing and a friend to all. She will be lovingly remembered by her husband of 61 years, Charles J. Weisser and daughters Natalie Weisser, Lisa Smith, Leslie Rahm and her special son in law, James Rahm. She will be greatly missed by her grandchildren, Jarrad, Jordan and Vanessa Smith, and Derek and Dylan Rahm. She is also survived by great-grandson, Grayson (Smith) Lilly and her grand dog, Rocky. Gloria was preceded in death by her beloved granddaughter, Dominique Lee Rahm. A viewing will be held on Sunday, February 21, 2021 from 5-7 p.m. with a memorial service starting at 7 p.m. at Connell Funeral Home, 245 E. Broad St. Bethlehem, PA 18018. Burial will be held privately. In lieu of flowers, memorial contributions may be made to the family to be distributed to a charity of their choice in Gloria’s honor.

Gloria J. Weisser, 80, of Bethlehem, beloved wife, mother and grandmother, went to heaven peacefully on February 14, 2021 surrounded by her loving family. Gloria was born on May 21, 1940 in Pittsburgh, PA, the daughter of the late Jean (Wolczko)... View Obituary & Service Information

The family of Gloria J. Weisser created this Life Tributes page to make it easy to share your memories.

Send flowers to the Weisser family.