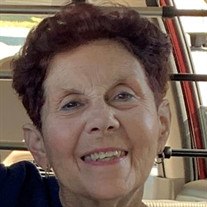 Marianne P. (Fidmik) Chickey, 74, of Bethlehem passed away unexpectedly at home on November 11, 2021. She was the daughter of the late George J. Fidmik, Jr. and Margaret (Yasko) Fidmik. She was the beloved wife of 49 years to the late, Adam E. Chickey, Jr. Marianne will be lovingly remembered for her vibrance, kindness, and selflessness. She was full of life, while maintaining a humble demeanor with a gentle spirit. Her faith and family were extremely important to her. She was devoted to the Blessed Mother and was a member of St. Anne’s Catholic Church Sodality. Marianne genuinely cared for those she met, which often came in the form of a hug, kiss on the cheek, and a jovial “Love ya”. She certainly brightened the days of those she encountered. Marianne graduated top of her class at St. Francis Academy. She worked in the personnel department at the Bethlehem Steel prior to finding great joy as a daycare teacher for the Bethlehem Area School District and Sayre Child Center. Marianne later brought smiles to the faces of those she interacted with at Krick’s Bakery and McDonald’s. Marianne will be dearly missed by her son, Brian Chickey and his wife, Francesca; daughter, Meg Chickey; sisters, Georgine Klinger (Robert), and Mary Louise Kaufmann (the late Maurice); brother, George J. Fidmik, III (Chris); as well as her grand-dogs, Reuben and Brindi; her cats, Angel and Callie; extended family and friends. A prayer service will be held 5:30 p.m. on Friday, November 19, 2021 followed by calling hours from 6:00-8:00 p.m. at Connell Funeral Home, 245 E. Broad St. Bethlehem, PA 18018. The family will also greet guests on Saturday from 9:30-10:00 a.m. at St. Anne’s Catholic Church, 450 E. Washington Ave. Bethlehem, PA 18017 with Mass of Christian Burial to follow at 10:00 a.m. Burial will be private for immediate family members. Memorial contributions may be made to Susan G. Komen Foundation, in recognition of Marianne’s victory over breast cancer.

Marianne P. (Fidmik) Chickey, 74, of Bethlehem passed away unexpectedly at home on November 11, 2021. She was the daughter of the late George J. Fidmik, Jr. and Margaret (Yasko) Fidmik. She was the beloved wife of 49 years to the late, Adam... View Obituary & Service Information

The family of Marianne P Chickey created this Life Tributes page to make it easy to share your memories.

Send flowers to the Chickey family.