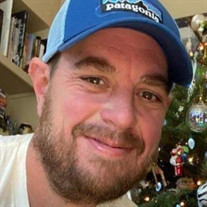 Nicholas P. Connell, 46, of San Diego, CA, formerly of Bethlehem, PA died Monday, February 22, 2021. Born in Bethlehem he was the son of Christine (Straub) and Patrick Connell. Nick attended Notre Dame High School in Easton and graduated from Blair Academy in New Jersey. He attended LaSalle University in Philadelphia. Nick held several jobs throughout his life. He worked for Connell Funeral Home, started his own landscaping business, a real estate business, but eventually he moved to Vermont where he purchased Encore Catering, which he currently owned and operated. Nick thoroughly enjoyed life, one of his favorite things to do was follow rock groups around the country, such as the Grateful Dead, Moe, Government Mule, Phish, and many more. Right before the pandemic Nick moved out to San Diego where he was truly happy and loved the west coast. Nick had a great heart will be missed greatly by all those that knew him. He will be lovingly remembered by his parents, grandfather, Robert Straub, sister, Anne wife of Captain Rolando Ramirez, USN, brother, Matthew Connell and companion, Heather Munsch, nieces and nephews, Allison and Ben Ramirez, and Daniel and Samantha Connell, companion, Dawn L. Watson. He was preceded in death by his grandparents, Gertrude and Francis Connell and Dorothy Straub. Services will be private and at the convenience of the family. Arrangements Connell Funeral Home. Memorial contributions may be made in Nick’s name to the Catholic Foundation of Eastern Pennsylvania for the Nicholas P. Connell Scholarship https://www.catholicfoundationep.org/funds/education-endowments/ to benefit Our Lady of Perpetual Help School, PO Box 1430, Allentown, PA 18105 or to Save Our Stages Act, 1 Penn Plaza #6263, New York, NY 10119 www.saveourstages.com

The family of Nicholas P. Connell created this Life Tributes page to make it easy to share your memories.

Send flowers to the Connell family.