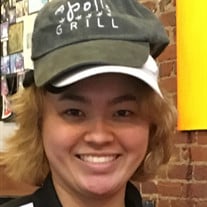 To heaven the bird flies Through the pale moonlit sky In the purest light Family and friends gathered on November 12, 2021 to honor the Lebenslauf (Life Path) of Nicole “Nic” Shearer Brennan. Nic’s Lebenslauf was presented by K. Ashley Caldwell whose touching and insightful tribute brought peace and, in time, healing to those touched by Nic’s life. You are invited to watch this tribute which is linked to this below. https://us02web.zoom.us/rec/share/NAwTdhbrTGWyQ5frFXazmQH-0mmvHKg0645E_FR4yPJmorhCn8yRhURTSmvVW2qZ.0IFK8313haq65jcI?startTime=1636729393000 Nic’s life’s path was highlighted by her endless pursuit of life’s deeper meaning, often leading to a passionate study of religion, culture, languages, and music. She challenged base understandings and demanded further critical analysis, often causing her role as a student to evolve in to that of the teacher. It did not go unnoticed by those who were touched by Nic’s spirit that her path was uniquely her own. A lover of music, Nic learned to play numerous instruments and was particularly gifted in playing the bassoon. She was a member of the Junior String Philharmonic and the Young People’s Philharmonic of the Lehigh Valley. As a senior in high school, Nic auditioned for the internationally renowned Bach Choir of Bethlehem. She was accepted as a Bach Choir Scholar, a prestigious honor, of which she was extremely proud. Nic also had deep compassion for animals, particularly those in need of care and shelter. She selflessly saved four cats over the years, adopting three from a shelter and one from the streets, naming them Peaches, Sparkles, Lucky and Sylvester. Nicole is survived by her parents, Robert P. and Heather (Smith) Brennan, Grandparents Charles and Jean (Shearer) Smith, and Robert E. and Bernadette Brennan; Aunts Pamela (Ray), Cynthia(Carol) and Carolyn (John); and cousins Christopher, Patrick, Ryan, Maya, and James. In lieu of flowers or gifts, Nic’s family asks that you make a donation in Nicole’s name to any of the following organizations: East Hills Band and Orchestra Association—Nicole was a member of the East Hills Band. She expanded her love of music during this time and donations in her name would be a fitting tribute. Donations in Nic’s loving memory can be made to: East Hills Middle School Attention: East Hills Band and Orchestra 2005 Chester Rd. Bethlehem, PA 18017 The Center for Animal Health and Welfare—Nic adopted all of her cats from this organization. It is a non-profit no-kill organization dedicated to saving animals and providing them a safe and healthy environment. To make a gift in Nicole’s memory, contact [email protected] or all 610-252-7722. Also visit https://healthyanimalcenter.org. Donations are 100% tax deductible. Nick’s Network of Hope—A non-profit organization that provides resources, education, and support about life challenges with an emphasis on mental health awareness, suicide prevention, and grief and loss. All donations are tax-deductible. To donate, go to https://nicksnetworkofhope.org/

To heaven the bird flies Through the pale moonlit sky In the purest light Family and friends gathered on November 12, 2021 to honor the Lebenslauf (Life... View Obituary & Service Information

The family of Nicole Shearer Brennan created this Life Tributes page to make it easy to share your memories.

To heaven the bird flies
Through the pale moonlit sky
In the...

Send flowers to the Brennan family.