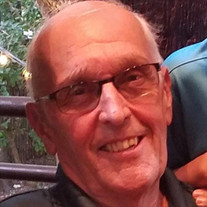 Richard John Skulteti, 79, of Bethlehem, passed away on Sunday, November 14, 2021, after a long battle with cancer. Born August 21, 1942, in Bethlehem, he was the son of the late John and Helen (Huesz) Skulteti. He was a member of Shepherd of the Hills Lutheran Church in Whitehall. A graduate of Liberty High School’s Class of 1960, Richard went on to serve in the United States Army, from which he received an honorable discharge. Following his military service, Richard entered the work force joining Bethlehem Steel Corporation. He retired in 2008 from J.C. Ehrlich Pest Control Company. Richard loved to fish and during his free time, could usually be found on one of the local area trout streams. During his later years, he spent his time fishing and hanging out with his buddies at Ranger Lake Rod and Gun Club. If he wasn’t fishing, Richard could probably be found working in his yard and socializing with neighbors and passersby. Richard and his wife traveled frequently to the Caribbean, where they shared many adventures during their retirement years. Above all, Richard was a devoted grandfather who closely followed his grandchildren’s activities. It was rare that a day went by without him reaching out to them. In addition to his parents, Richard was preceded in death by his wife of fifty years, Patricia Ann Skulteti, who died in 2019. Richard will be lovingly remembered by his son: Matthew Skulteti (Meg) of New Braunfels, TX; his daughter: Kara Laubach (Vince) of Pennsburg, PA; one sister: Sharon Feight (Bill) of Hellertown, PA; and four grandchildren: Jack, Mikey, Alex, and Kate. He will also be missed by the many close friends he made along the way. A visitation will be held at the Connell Funeral Home, Inc., 245 East Broad Street, Bethlehem, on Wednesday, November 17, 2021, from 6:00-8:00 pm. A second visitation will be held on Thursday, November 18, 2021, from 10:00 am until the time of the funeral service at 11:00 am, at the funeral home. Interment will be in Holy Saviour Cemetery, Linden Street, Bethlehem.

Richard John Skulteti, 79, of Bethlehem, passed away on Sunday, November 14, 2021, after a long battle with cancer. Born August 21, 1942, in Bethlehem, he was the son of the late John and Helen (Huesz) Skulteti. He was a member of Shepherd... View Obituary & Service Information

The family of Richard John Skulteti created this Life Tributes page to make it easy to share your memories.

Richard John Skulteti, 79, of Bethlehem, passed away on Sunday,...

Send flowers to the Skulteti family.