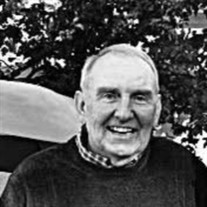 Robert E. Hugelmeyer, 79, of Palmer Twp. and formerly of Woodbridge Twp., NJ; died on May 3, 2020 with his family by his side. He was born January 7, 1941 in Brooklyn, NY; son of the late William Gustave and Helen (Bebensee) Hugelmeyer. Robert is survived by his devoted wife of 53 years, Donna L. (Carroll) Hugelmeyer. He will be remembered as a wonderful family man, a devoted educator, and a faithful believer that God has a plan for all of us. Bob understood that the path he followed in life led him to where he was meant to be. Bob went to St. Mary’s High School in Perth Amboy, where he excelled on the basketball court and was known as the “Kangaroo Kid.” Upon graduation from St. Mary’s High School, he embarked on a journey that would lead him to a decorated career in education. After earning his degree from St. Peter’s College, Bob took a position as a fifth-grade teacher and was also given a role as JV basketball coach. Later, he took a position with Woodbridge State School where his love of special education developed. While working at Woodbridge, Bob earned his Master’s degree in Behavioral Sciences from Kean University with a certification in special education. His responsibilities grew and he became Director of Education at Woodbridge and served as an adjunct faculty member teaching Educational Psychology at Kean University. In 1985, Bob was offered principalship in a State Facility in Secaucus, NJ. In 1989, he was promoted to Educational Program Specialist in the Office of Education and served as the legislative liaison to the Senate and Assembly Educational Committees. At the end of Bob’s professional career, he loved his opportunity to return to teaching elementary school. Throughout his career, Bob earned several awards, most notably the Governor’s Teacher’s Award as outstanding teacher of the year in 2003. In his life, Bob was a Scout Master. He enjoyed to fly fish and hunt in the mountains and fish, crab, clam, and boat at the shore. Robert was also a devoted member of the church, and was active throughout his life in ministries such as Eucharistic Minister, Marriage Encounter, parish retreats, Knights of Columbus, and many more. He will be dearly missed by his wife, Donna; children, Donnalee Carroll and husband, Michael; Tracy Carlin and husband, Matthew; and Robert J. Hugelmeyer and wife, Casey; grandchildren, Liam, Sean, Ryan, Daniel, Breene, Ben, Evelyn, Robert W., Jesse, Gus; and his younger brother, John Hugelmeyer. Robert was preceded in death by his older brother, William Hugelmeyer, just five days earlier. Services have been entrusted to Connell Funeral Home and will be private. Two of Bob’s great loves in his life were being a Catholic and special education. Mercy School for Special Learning brings those two together. Memorial contributions may be made to Mercy School for Special Learning, 830 S. Woodward Ave. Allentown PA 18103. Condolences may be offered at www.connellfuneral.com.

Robert E. Hugelmeyer, 79, of Palmer Twp. and formerly of Woodbridge Twp., NJ; died on May 3, 2020 with his family by his side. He was born January 7, 1941 in Brooklyn, NY; son of the late William Gustave and Helen (Bebensee) Hugelmeyer. Robert... View Obituary & Service Information

The family of Robert E. Hugelmeyer created this Life Tributes page to make it easy to share your memories.

Robert E. Hugelmeyer, 79, of Palmer Twp. and formerly of Woodbridge...

Send flowers to the Hugelmeyer family.