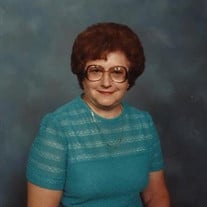 Veronica “Ronnie” (Godovin) Semanick was born in Bethlehem, PA in 1923 and resided there for nearly 90 years. She passed away on May 10th at Somers Place in Egg Harbor Township, NJ, where she lived for the past 5 years. Ronnie was married to her high school sweetheart, John, for over 65 years. Graduating first in her Bethlehem Catholic High School class in 1941, she was awarded a full scholarship to Moravian Seminary/College. However, World War II began, so she worked as a civilian secretary for the US Department of Navy at the Bethlehem Steel offices. After the war, she worked at the Social Security Administration as a claims representative in Allentown, retiring in 1985. Even after she retired, she stayed active by working part-time at Bon-Ton Department Store and also volunteered as an election official. Ronnie was an active member of the Saints Simon and Jude Catholic Church Senior Group in Bethlehem, and continued receiving their newsletters after moving to Little Egg Harbor in 2012. Ronnie enjoyed cooking and collected cookbooks. She is best known for her kiffle cookies, which she made on every holiday and for special events. Ronnie is survived by her three sons, Gregg in Little Egg Harbor, NJ, Ronald (Nancy) in Palmer Township, PA and John (Celeste) in Fuquay-Varina, NC; her six grandchildren, John, Robert, Kevin, Mark, Andrew and Matthew, three great grandchildren, Olivia, Maya and John; and many nieces and nephews. She is predeceased by her brother, John, and two sisters, Mary and Helen, and her beloved husband, John. A memorial service will be held at a later date. Donations in her memory can be made to Saints Simon and Jude Church, 730 W Broad St, Bethlehem, PA 18018.

Veronica &#8220;Ronnie&#8221; (Godovin) Semanick was born in Bethlehem, PA in 1923 and resided there for nearly 90 years. She passed away on May 10th at Somers Place in Egg Harbor Township, NJ, where she lived for the past 5 years. Ronnie... View Obituary & Service Information

The family of Veronica E. Semanick created this Life Tributes page to make it easy to share your memories.

Send flowers to the Semanick family.