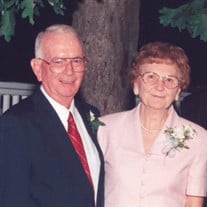 Virginia B. Haas, 97, of Country Meadows, Bethlehem, died on March 29, 2022. She was born the youngest of nine on August 22, 1924 to Patrick Kelly and Elizabeth (Scully) Kelly of Bethlehem. She was preceded in death on March 19, 2022 by her husband of 75 years, Charles F. Haas. Also preceding Ginny in death were siblings Patrick, Joseph, James, Mary (Dwyer), Ann (McCracken), Kathryn (Duffy), Elizabeth (Diggles), and Julia (Lyons). Surviving are sons, Richard (Kathleen), Michael, Robert (Judith), Thomas (Susan), and Jeffrey (Jennifer); as well as 9 grandchildren and 11 great-grandchildren. Ginny was a graduate of Bethlehem Catholic High School, Class of 1941, where she was captain of the basketball team. She then attended Bethlehem Business College. She was a lifelong member of St. Ursula Church in Fountain Hill and was also a member of the Golden Hillers. Ginny was employed by Lehigh Valley Railroad, Bethlehem Steel Corp. and had a long career and retired from St. Luke’s Hospital as business office manager. In retirement, she volunteered at Cedarbrook Senior Care in Fountain Hill. Arrangements have been entrusted to Connell Funeral Home. The services for Charles, which were postponed in March, will now be combined with the services for Virginia. This is a very fitting tribute, for in life they were inseparable. The family will receive friends at St. Ursula Catholic Church, 1300 Broadway, Fountain Hill, PA 18015 on Saturday, April 9, 2022 from 8 a.m. to 10 a.m. with a Mass of Christian Burial to follow at 10 a.m. Burial will be held at Holy Saviour Cemetery. Memorial contributions may be made to St. Ursula Catholic Church. Condolences may be offered at www.connellfuneral.com.

The family of Virginia and Charles Haas created this Life Tributes page to make it easy to share your memories.

Send flowers to the Haas family.