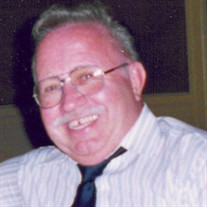 Bernard Gerald Sokolsky, 84, of Bethlehem Twp., a wonderful husband, father, and grandfather, died on December 19, 2021 at his home. He was born April 13, 1937 in Wilkes Barre, PA; son of the late Bernard Stanley and Catherine Scupski Sokolsky. Bernard is survived by his devoted wife, Carol (Mohrey) Sokolsky. Bernard was a graduate of Bethlehem Catholic High School. He proudly served in the US Army for 2 years. Bernie retired from the Bethlehem Steel Corp. where he worked in the mechanical maintenance department. He will be lovingly remembered as a selfless and generous man who was loved by all he encountered. During his younger years, he enjoyed fishing with his dad and brother. Bernie met his wife of 51 years while polka dancing. In his later years, he had great fun traveling with his wife to casinos where they would play the slot machines. Bernie was an avid Philadelphia sports fan. Fly Eagles Fly! Bernard will be dearly missed by his wife, Carol; daughter, Lori Schiffert and husband, Michael; and grandchildren, Vivian and Daniel. He was preceded in death by his two sisters, brother, and grandson, Dexter Schiffert. “When we lose someone we love, we must learn not to live without them, but to live with the love they left behind” -Anonymous Arrangements have been entrusted to Connell Funeral Home. A visitation will be held on Thursday, December 23, 2021 from 9-9:45 a.m. at Sacred Heart Catholic Church, 1817 First St. Bethlehem, PA 18020 with a Mass of Christian Burial to follow. Burial will be held at Cedar Hill Memorial Park. Memorials may be made to The Pancreatic Cancer Action Network.

Bernard Gerald Sokolsky, 84, of Bethlehem Twp., a wonderful husband, father, and grandfather, died on December 19, 2021 at his home. He was born April 13, 1937 in Wilkes Barre, PA; son of the late Bernard Stanley and Catherine Scupski Sokolsky.... View Obituary & Service Information

The family of Bernard Gerald Sokolsky created this Life Tributes page to make it easy to share your memories.

Send flowers to the Sokolsky family.