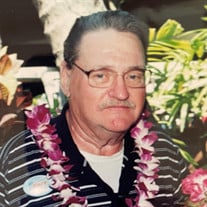 UPDATED SERVICE INFORMATION: A visitation will be held on Sunday, December 5, 2021 from 6-8 p.m. and again on Monday from 10-11 a.m. with a service to follow at Connell Funeral Home, 245 E. Broad St. Bethlehem, PA 18018. Interment will be held at Cedar Hill Memorial Park. Guests will be kindly asked to wear a mask upon entry. Edward D. Voorhees, 78, of Bethlehem, died unexpectedly on November 23, 2021. He was born in Brooklyn, NY on August 5, 1943; son of the late Henry and Mary (Skrobak) Voorhees. He is survived by his devoted wife of 54 years, Shirley A. Voorhees. Edward was truly Shirley’s soulmate and they cared for one another immensely. Edward will be forever remembered as a family man. He loved spending time with his family; especially the Sunday gatherings. Edward was a talented cook and he loved cooking for the family. He was famous among his children and their friends for Eddie’s Cheesesteaks. He found great joy in sports. Edward was a graduate of Bethlehem High School, where he played Baseball. He was an avid San Francisco Giants, New York Rangers, and New York Giants fan. In most seasons, they did not meet his expectations with their level of play. Edward’s all-time favorite athlete was Willie Mays. Edward will also be remembered for his sense of humor. He was a joker and treasured the funny moments in life. Edward enjoyed playing baseball games on his PlayStation, which enabled him to form a special bond with his grandson, Nicholas, who helped when technical support was needed. On occasion, neighbors could find Edward taking his cat, Rusty, for a walk on a leash around the block. Edward proudly served in the US Army from 1961-1964, attaining the rank of Specialist. Upon returning home, he accepted a position at Bethlehem Steel Corp. Edward retired from the Beam Yard after over 35 years of service. He will be dearly missed by his wife, Shirley A. (Hawk) Voorhees; son, Mark W. Voorhees and his wife, Karen; daughter, Tracy L. Hetrich; and grandchildren, Hannah, Nicholas, Justin and Brittany. Edward was preceded in death by his siblings, Robert Voorhees, Jean Kulp, and Celesta Yerger. Memorial contributions may be made to American Heart Association.

UPDATED SERVICE INFORMATION: A visitation will be held on Sunday, December 5, 2021 from 6-8 p.m. and again on Monday from 10-11 a.m. with a service to follow at Connell Funeral Home, 245 E. Broad St. Bethlehem, PA 18018. Interment will be held... View Obituary & Service Information

The family of Edward D. Voorhees created this Life Tributes page to make it easy to share your memories.

UPDATED SERVICE INFORMATION:
A visitation will be held on Sunday,...

Send flowers to the Voorhees family.