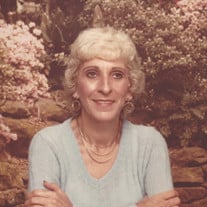 Eleanor V. Greene, 86, of Bethlehem passed away Tuesday, February 18, 2020 at St. Luke’s Hospital in Fountain Hill. Born at home in Nazareth, she was the daughter of the late Ada (Reiss) and Artie Snyder, Sr. She was married to John A. Greene, Jr. for 49 years until his death on March 6, 2002. Eleanor dedicated her life to her family. She was a resident of Lutheran Manor, where she went to church and Bible study. Eleanor was an avid bowler especially at Town and Country Lanes in Bethlehem. She enjoyed cooking, baking, and going to socials with her dear friends at Lutheran Manor. Eleanor will be lovingly remembered by her daughters, Gail wife of Martin Pillar, III and Carol wife of James Brinker, son, John A. Greene, III, brothers, Vernon Snyder, Arthur Snyder, and Raymond Kresge and his wife Millie, sister, June wife of Claude Young, grandchildren, Brandy Brinker, Ashley Brinker, Briana Pillar, and Hunter Pillar, and two great grandchildren, Leah and Kai. She was preceded in death by her grandson, Shane Pillar and brother, Artie Snyder, Jr. A viewing will be held on Wednesday, February 26, 2020 at Connell Funeral Home 245 E. Broad St., Bethlehem, PA 18018 from 10-11 AM followed by a funeral service at 11 AM. Burial will be at Fairview Cemetery in Bethlehem. Memorial contributions may be made in Eleanor’s name to St. Jude's Children's Research Hospital, 501 St. Jude Place, Memphis, TN 38105

Eleanor V. Greene, 86, of Bethlehem passed away Tuesday, February 18, 2020 at St. Luke&#8217;s Hospital in Fountain Hill. Born at home in Nazareth, she was the daughter of the late Ada (Reiss) and Artie Snyder, Sr. She was married to John... View Obituary & Service Information

The family of Eleanor V. Greene created this Life Tributes page to make it easy to share your memories.

Send flowers to the Greene family.