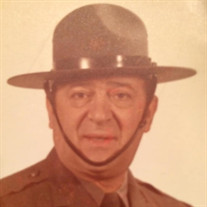 Eugene A. Corsi, 93, of Bethlehem passed away in his home on Wednesday, April 1st surrounded by his loving family. He was the husband of Rose M. (Rich) Corsi to whom he was married over 67 years. He was the son of the late Cataldo and Philomena (Cocci) Corsi. Born in Sayre, PA, Gene was a graduate of Sayre High School and the Pennsylvania State Police Academy. Following high school, he served with the U.S. Navy in the Pacific Theater during World War II. After leaving the service, he briefly worked for the Lehigh Valley Railroad before beginning his dedicated and loyal 32 ½ year career with the State Police. During that time, he served mostly with Troop M in Bethlehem, Doylestown, Fairless Hills, and Easton. He was a Breathalyzer Instructor and Maintenance Officer teaching other Troopers and local police in its use and maintenance at the Southeast Training Center. In addition, he also served as Garage Inspector in Lehigh County before retiring as a Corporal with duty as Supervisor in the Patrol Unit for Troop M. After retirement, he began a second career working for Northampton County as a Deputy Sheriff for three years and then twelve years as a Court Officer for Honorable Judge Kimberly McFadden. Gene, loved serving his community, attending Lehigh University football and basketball games, and watching his grandchildren and great-grandchildren’s sporting events and activities. He was a longtime member of Our Lady of Pompeii Church and recently of St. Anne Catholic Church in Bethlehem. He was Scoutmaster for Troop 20 at Our Lady of Pompeii Church, longtime member and officer of the Holy Name Society and Fraternal Order of Police Lodge #40. His special passion was for the Bethlehem Chapter of UNICO. He was one of the founding members of the chapter and served many years as the Treasurer taking great pride in raising funds to support college scholarships for aspiring young men and women of Italian heritage. Survivors: Besides his wife Rose, four children: Bob and his wife Donna, Roseann and her husband Frank Scattene, Chuck, and Jean and her husband Michael Caffrey; Five grandchildren: Matt Corsi and wife Susan, Robert Corsi and wife Julia, Marc Corsi and wife Nichole, Michael Caffrey, and David Caffrey; Four great-grandchildren, Joey, Brayden, Jordan, and Dominic; sister Nancy Ginnetti and husband Hank of Breesport, NY and nieces and nephews. Services: Because of current restrictions, services are private. Connell Funeral Home, Bethlehem is in charge of arrangements. A Mass to celebrate Gene’s life will be held at a later date. In lieu of flowers, contributions can be made by mail to St. Jude Children’s Research Hospital, 501 St. Jude Place, Memphis, TN 38105 or online to stjude.org/give

Eugene A. Corsi, 93, of Bethlehem passed away in his home on Wednesday, April 1st surrounded by his loving family. He was the husband of Rose M. (Rich) Corsi to whom he was married over 67 years. He was the son of the late Cataldo and Philomena... View Obituary & Service Information

The family of Eugene A. Corsi created this Life Tributes page to make it easy to share your memories.

Send flowers to the Corsi family.