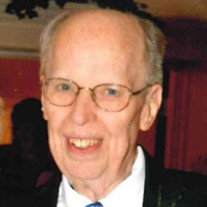 John J. Repasch, Jr., 77, of Bethlehem, died on Saturday, February 5, 2022. He was born May 1, 1944 in Fountain Hill; son of the late John J. and Agnes M. (Marchak) Repasch. John is survived by his devoted wife of 54 years, Patricia Ann (Temos) Repasch. John will be lovingly remembered as a caring and thoughtful person. John enjoyed polka music and was a terrific dancer. He met his wife at a dance and the two have been dance partners ever since; traveling around the world together as well as following the Walt Groller Orchestra. He enjoyed spending time with family and friends at social and sporting events. John graduated from Muhlenberg College with a Bachelor's degree in chemical engineering. He put his education to good use as he worked up the ranks in the research department of the Bethlehem Steel Corp. and ISG; retiring as a research consultant after over 39 years of service. Later he worked at the Lehigh Canal Museum and as a courier for Coordinated Health. John was a lifetime member of the Knights of Columbus Trinity Council 313. John is dearly missed by his wife, Patricia; son, David Repasch and his wife, Jacinta; daughter-in-law, Maureen Repasch, wife to John's late son, Matthew who passed October 26, 2021; brother, James Repasch and his wife, Loretta; step-grandchildren, Kathleen and Diana Kauffman, and Patrick Leeper; as well as his nieces, nephews, and extended family. Arrangements have been entrusted to Connell Funeral Home. The family will receive guests on Thursday, February 10, 2022 from 10-11 a.m. at Our Lady of Perpetual Help Catholic Church, 3219 Santee Rd., Bethlehem, PA 18020 immediately followed by Mass of Christian Burial. Interment will be held at Holy Saviour Cemetery. Memorial contributions may be made to the Alzheimer's Association 225 N. Michigan Ave. Floor 17 Chicago, IL 60601 and/or the Lymphoma and Leukemia Society, PO Box 22470 New York, NY 10087.

The family of John Joseph Repasch, Jr. created this Life Tributes page to make it easy to share your memories.

Send flowers to the Repasch family.