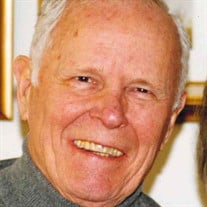 After a long life well lived, Joseph J. O’Keefe Jr, 97, of Bethlehem, PA passed away peacefully on February 10, 2021. Born in the 6th ward of Allentown, PA and known as “Joe,” “Dad,” “Grandad,” and a neighbor and friend to many, Joe graduated from William Allen High School in 1941 as class president and began his engineering studies at Lehigh University. Always believing that education was vitally important, travel was the best form of education, and travel that educated you was even better when someone else paid for it, Joe joined the Marine Corps in 1941 and served during World War II. He graduated from Lehigh University in 1946 after the war ended. Joe took pride in his WWII service and was recalled to the Marine Reserves during the Korean War. He frequently reminded us, “once a marine, always a marine!” and noted the Marine Corps Birthday each year. Always proud of his Irish heritage, Joe told people “Happy St. Patrick’s Day!” every day of the year. Joe later graduated from the University of Maryland’s School of Law and worked as the manager of the patent division at Bethlehem Steel, retiring from Bethlehem Steel in 1982 but never truly retiring, as he then opened his own law practice. Over the years Joe visited 48 US States and 80 separate countries, and he instilled a love of travel and constant learning in all those around him. Joe deeply loved Nancy, his “beautiful bride” of 70 years and his children and grandchildren. His family remembers him constantly asking, “Anything we can do for you?” He had a wonderful sense of humor and was quick to either crack a joke or say something provocative, and he turned all of his travels and adventures into stories that he loved to share. Joe enjoyed conversations with family, friends, neighbors, and coworkers -- and any strangers who he met quickly became friends. He will be lovingly remembered and forever missed by his wife Nancy, sons Joseph J. O’Keefe (Tish) of Bellingham, WA, Michael P. O’Keefe (Cindy) of Henderson, NV, and Sean E. O’Keefe of Bethlehem, PA, along with his grandchildren Tyler, Andrew (Caity), Hope (Ben), Justin, Ryan, Craig, and Erin and his first great-grandchild, Anne. He was preceded in death by his sister Veronica, his daughter, Nancy, and grandson Peter. A funeral Mass will be celebrated at St. Anne’s Roman Catholic Church on Saturday, March 6, 2021 at 11:00 a.m. Photos and music in Joe’s memory will be in the back of the church at 10:30-11:00 a.m. prior to Mass. Memorial contributions may be made to St. Anne’s Parish in Bethlehem, where Joe and Nancy were parishioners for 60 years.

The family of Joseph J. O'Keefe created this Life Tributes page to make it easy to share your memories.

Send flowers to the O'Keefe family.