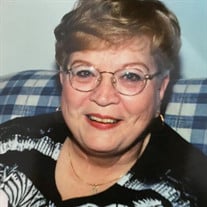 Margaret “Peggy” M. Norder, 78, of Bethlehem Twp., died on December 14, 2020. She was born in Pittsburgh, PA; daughter of the late Edward Vincent and Mary (Fisher) Kelly. Peggy was a graduate of St. Peter High School in Pittsburgh and later earned her license in cosmetology. She spent many years working at Merchants Bank as a Bank Teller. She ended her working career at Deiter Brothers as an office worker. She will be lovingly remembered as a strong and independent woman, who had a tremendous work ethic and always put her family first. Peggy was incredibly talented and was able to fix most anything around the house. She enjoyed arts, crafts, and sweets. Peggy was proud of her Irish heritage and was a member of the Ancient Order of Hibernians. She was also a dedicated member of Hanover Township Volunteer Fire Company for many years, where she served as the treasurer and was a member of the Bethlehem Lioness Club. Peggy will be dearly missed by her son, Don Norder, Jr. and wife, Ann Marie; daughter, Karen Peters and husband, Josh; son, Bobby Norder and wife, Tina; sister, Rita Rhue of Jacksonville, FL; grandchildren, Eric, Alex, Adam, Michelle, Andy, Scotty, Courtney, Caitlyn, Carissa, and Christina; and great grandchildren, Dylan, Natalie, Holden, Caliana, Carli, Camri, and Marco; and former husband of 27 years, Donald Norder, Sr. She was preceded in death by her siblings, Edward Kelly; Patricia “Sis” Steinbach, James Kelly, and John “Jack” Kelly. Arrangements have been entrusted to Connell Funeral Home. A visitation will be held on Monday, December 21, 2020 from 9:30 -11 a.m. at Sacred Heart Catholic Church, 1817 1st St. Bethlehem, PA 18020 with a Celebration of Eternal Life Mass to immediately follow. In lieu of flowers, memorial contributions may be made Hanover Township Volunteer Fire Company, 100 Stoke Park Rd. Bethlehem, PA 18017.

The family of Margaret M. Norder created this Life Tributes page to make it easy to share your memories.

Send flowers to the Norder family.