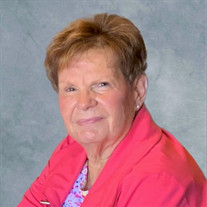 Margaret (Peggy) Kathryn Koval Crim, 72 of Bethlehem, PA, passed away peacefully surrounded by her loving family and friends on October 18, 2021 at St. Luke’s University Hospital. Peggy was born in Shenandoah, PA on December 8, 1948 to the late Stephen and June (Phillips) Koval. Peggy graduated from Mahanoy Area High School in 1966 where she was a member of the marching band. She played the trumpet in high school and college and also played in the Legion Band. She was a member of both the school and church choirs. Following her high school graduation, Peggy attended Bloomsburg University where she studied Early Elementary Education. She subsequently earned her teaching degree from Kutztown University. Peggy married her beloved husband, Dennis in 1968 and was a truly devoted wife, mother, grandmother, sister aunt and friend. She deeply cared about her larger extended family as well as everyone she knew. Peggy was a kind, loyal and courageous friend to all. Peggy found her calling teaching young children. She was an elementary school teacher in the Bethlehem Area School District. She taught in several schools throughout the district, but spent the majority of her teaching career at Asa Packer Elementary School. While at Asa Packer, she spent countless days and nights planning every lesson down to the smallest detail, correcting papers, and preparing for plays and musicals with her fellow teacher, friend, and travel partner, Gale Murphy. Peggy retired from teaching after 32 years in 2011. Peggy was a longtime, active member of the Church of the Manger, UCC where she served as the Financial Secretary. She led the parish visitation team, helped establish the God Squad, and was a President of Women’s Guild. Peggy loved planning the annual friendship tea and organizing the display of Nativity sets during the Christmas season. Peggy was also proud to continually and seasonally enhance and beautify the church grounds including the flowers for Sunday services. In addition to her passion for teaching and her devotion to her family, Peggy enjoyed traveling both across the United States and Europe. She enjoyed her trips to Scotland, Italy, river boat cruises on the Rhine and the Danube. She was able to introduce each of her grandchildren to the joys of Disney World. Peggy enjoyed her yearly trips to Myrtle Beach, but her true love was her anniversary trips late in November to Cape Cod, where she discovered the Christmas Tree Shops long before any of her friends knew they existed. She loved putting together her numerous jigsaws, solving the daily Jumble and cryptoquotes puzzles, and but most of all shopping. Peggy was preceded in death by her father (1962), mother (2016) and step-father, Frank Seltzer of Barnesville, PA (2021). Peggy is survived by her husband Dennis. They would have celebrated their 53rd anniversary on November 29th. Also, a daughter, April and husband Clyde (Ted) Brown and granddaughters, Kaitlyn and Megan of Archbald, PA; and son David and grandson, Cameron and granddaughter Makenna of Bethlehem, PA. Peggy is also survived by her four sisters and three brothers, Carla Gnall and husband Andy of Concord, CA; Stephen and Mary Koval of Mahanoy City, PA; Cindy Rosso and husband Robert of Conway, SC; Kathy Edwards and husband Lance of Mesa, AZ; Joyce Dougherty and husband David of Downingtown, PA; Frank Seltzer and wife Linsey of Catawissa, PA and Eric Seltzer and wife Roxanne of Frackville, PA; sister-in laws, Nancy Crim of Myerstown, PA and Alayne Benner of Bloomsburg, PA; 20 nieces and nephews and 27 grand-nieces and nephews. A memorial service will be held at the Church of the Manger, 1401 Greenview Drive, Bethlehem, PA on Sunday October 31, 2021. Calling hours will begin at 2:00 PM followed by the service at 3:30 PM. The church service will be officiated by Pastor Marian Johnson. Interment will be at Cedar Hill Memorial Park, 1700 Airport Road, Allentown, PA on Monday, November 1, 2021. The procession will meet at the Church of the Manger at 10:30 AM with interment beginning at 11:00 AM. In lieu of flowers, the family would prefer donations be made to the Church of the Manger.

The family of Margaret "Peggy" K. Crim created this Life Tributes page to make it easy to share your memories.

Send flowers to the Crim family.