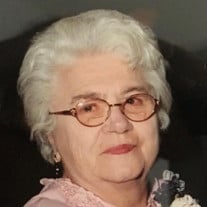 Mary Springer, 94, of Bethlehem, passed away Wednesday, April 29, 2020 at Easton Home. She was born October 6, 1925 in the Ukraine. Mary was married to Michael Springer, Sr. for 59 years until his death on July, 10, 2006. Mary worked as a cook for 25 years at Lehigh University. She was a member of St. Josaphat Ukrainian Catholic Church in Bethlehem. Mary will be lovingly remembered by her sons, John Springer and wife Dianne and Michael Springer, Jr. and wife Susan, daughter, Ann Laughlin and husband Milton, grandchildren, John Springer, Jr., and Jennifer Rivera, and great grandchildren, Jason Michael, Jr., Nicholas Ronald, Savannah and Morgan. She was preceded in death by her grandson, Jason Michael. Services are private and at the convenience of the family. Arrangements entrusted to Connell Funeral Home. Memorial contributions may be made in Mary’s name to Easton Home, 1022 Northampton St., Easton PA 18042

The family of Mary Springer created this Life Tributes page to make it easy to share your memories.

Send flowers to the Springer family.