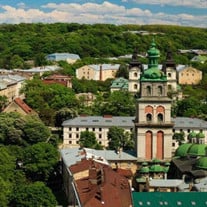 Ola B. Cehelsky, born on May 1, 1925 in Lviv, Ukraine to Volodomyr Bilozor and Maria Fedynska Bilozor, died on October 30, 2021, at Above and Beyond Assisted Living in Allentown, PA. She was a long-time resident of Bethlehem, PA. During WWII Ola and her family fled to Germany. A refugee in a Red Cross Camp, trained in Conservatory for voice and opera, she performed for United States troops, was married and gave birth to two children before immigrating to the United States in 1949. Married to Yaroslav Cehelsky, they landed in New York City. They moved to Bethlehem in 1950, where three more children were born and raised. Ola loved music; she taught piano and sang in the choir at Josephat’s Ukrainian Catholic Church. She taught children Ukrainian language and she helped organize the Lehigh Valley Ukrainian Millennial Choir, with whom she traveled to celebrate 1000 years of Christianity in Ukraine, visiting various parishes along the way. Her talents extended to reciting poetry in various festivals in Lehighton, PA. She was adept at sewing; making various Halloween costumes, costumes for stage, and clothed her three daughters. People were delighted with her delicious pastries, cakes, and tortes, that were beautifully decorated for special occasions and bazaars. Ola worked at various Lehigh Valley sewing factories for name brand clothing. She enjoyed tending to delicious vegetables in two gardens, canning and sharing pickles with family and neighbors. She is predeceased by her husband, Yaroslav Cehelsky. Surviving are her four children, Martha M. (Cehelsky) Jarosh (Roman) of New Lebanon, NY, Adrian Cehelsky (Diane) of Covington Twp., PA, Nadiya Cehelsky Kidd (the late Owen) of Whitehall, PA, and Oksana Cehelsky Klapischak (George) of Santa Fe, NM; as well as two sisters, Natalia Bilozor Koropeckyj of Elkin Park, PA., and Oksana Bilozor Koropeckyj, of Catonsville, MD; and three grandchildren, Julian Jarosh (Jennifer) of London ON, Sofia Klapischak of Sante Fe, NM, and Deanna Klapischak of Ann Arbor, MI. Arrangements have been entrusted to Connell Funeral Home. The family will receive guests on Thursday, November 4, 2021 from 9:30-10 a.m. at St. Josaphat Ukrainian Catholic Church with Office of Christian Burial to follow at 10 a.m. Burial will be held at St. Josaphat’s Cemetery. In lieu of flowers, donations may be made to the church and/or Ukrainian National Women’s League, Branch #91.

Ola B. Cehelsky, born on May 1, 1925 in Lviv, Ukraine to Volodomyr Bilozor and Maria Fedynska Bilozor, died on October 30, 2021, at Above and Beyond Assisted Living in Allentown, PA. She was a long-time resident of Bethlehem, PA. During WWII... View Obituary & Service Information

The family of Ola B. Cehelsky created this Life Tributes page to make it easy to share your memories.

Send flowers to the Cehelsky family.