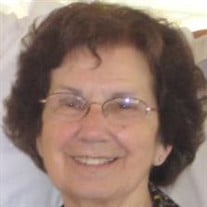 Sylvia J. Spirk died peacefully at her home of more than 63 years on Friday, November 13, 2020. Born December 23, 1926 in Fountain Hill, PA to the late Anthony and Amelia (DiMeglio) Iasiello. She was the wife of Bernard R. Spirk, Sr. for 69 years, married July 7, 1951. Sylvia and Bernie were 1945 graduates of Fountain Hill High School. Sylvia’s first job was as a clerk at FC Woolworth on Third & New Streets, Southside Bethlehem then, at the time of her marriage, in the business office of H Leh & Co. in Allentown. When her youngest children were middle school aged, Sylvia began working in the guidance departments of, first, Notre Dame High School, then, Bethlehem Catholic, and ending her working career at Allentown Central Catholic after more than 20 years of touching the lives of thousands of students. Nothing was more important to Sylvia than her family. She liked being part of a big family. She was the seventh of nine and she and Bernie had eight children. As a mother, she immersed herself in raising her children and, as Grams, helping with her grandchildren and great-grandchildren. She followed their school-aged achievements and then supporting them in their adulthood endeavors. Survived by her husband; children - Bernard, Jr., Michael (Susan), Janice, Patricia (John), Mary Beth (Margaret), David (Ann), Francis (Patricia), Robert (Alicia); grandchildren – Bernard, III (Leslie), Jenna (Anthony), Emily (Joseph), Meredith (Patrick), Matthew (Christine), Kelly (Michael), Katie (Todd), Isabelle, Sarah (Derrick), Ian, Grace, Jill, Thomas, Steven, Amelia, Meghan (Michael), Allison, Lindsey, Robert; great grandchildren – Madison, Benjamin, Vienna, Charlotte, Harper, Lincoln, Mila, Cole, Miranda, Delaney, Sylvie, Beverly, Cecelia, Henrietta, Olivia, William, Nora, Paige, Collin, Addison, Nathan, Luke; siblings – Gloria, Eugene, Anna Marie; and many nieces and nephews. She was pre-deceased by her parents; siblings – Dellie, Lena, Anthony, Sarah, Amelia; daughter-in-law – Marsha. Sylvia was a member of Sacred Heart Catholic Church, Bethlehem Twsp for over 60 years. A funeral Mass will be held for Sylvia at Sacred Heart on Friday, November 20, 2020 at noon. A viewing will be held at the church 10:30am – noon prior to the funeral. For the health and safety of the Spirk family, there will be no receiving during the church viewing hour. Interment will follow at a later date at the privacy of the family. The family asks that in lieu of flowers, contributions can be made in Sylvia’s memory to Sacred Heart Church 1817 1st Street, Bethlehem, PA 18020. Her arrangements are entrusted to Connell Funeral Home. Condolences may be offered at www.connellfuneral.com. THE SERVICE WILL BE LIVE STREAMED AND CAN ALSO BE VIEWED AT A LATER TIME USING THE LINK BELOW: https://youtu.be/Sc3zbxGjDAc

Sylvia J. Spirk died peacefully at her home of more than 63 years on Friday, November 13, 2020. Born December 23, 1926 in Fountain Hill, PA to the late Anthony and Amelia (DiMeglio) Iasiello. She was the wife of Bernard R. Spirk, Sr. for 69... View Obituary & Service Information

The family of Sylvia J. Spirk created this Life Tributes page to make it easy to share your memories.

Sylvia J. Spirk died peacefully at her home of more than 63 years...

Send flowers to the Spirk family.