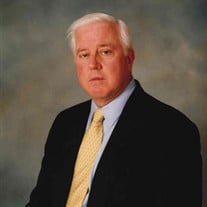 Thomas Joseph Lyons, known to his family and friends as Tucker, passed away peacefully at home on April 11, 2021 at 66 years of age. Tucker was born on January 20th, 1955 in Plainfield, NJ to the late Lucy and Joseph Lyons. He attended Farleigh Dickinson University, where he earned a degree in business management. After relocating to Pennsylvania, he ran Blue Valley Welding Supply and helped grow the family business from two to seven locations. Following the sale of the company, he ventured into the restaurant industry, establishing the Apollo Grill, a popular Bethlehem restaurant, with his partners. He was passionate about golf, and not only played regularly but also served on the Board of Governors at Saucon Valley Country Club. Tucker enjoyed hunting as well as skeet shooting with the Weyhill Skeet Group. He spent summers at the Jersey shore, where he enjoyed fishing, boating, and being on the water. Entertaining friends and family with a good story was one of his favorite past times, and he will be fondly remembered for his generosity and loveable spirit. When he was at his best, there was no one more fun to pass the time with. He is survived by his devoted wife of 44 years, Patricia Lyons, as well as his children: Dr. Bridget Mary Lyons and husband Ben; Casey Erin Lyons; and Patrick Joseph Lyons and wife Emily and their son Francis, a child who always put a smile on his Pop Pop’s face. He is also survived by his siblings: Pat Kelleher and husband Bill, Mary Burt and husband John, Jim Lyons and wife Peggy, and brother-in-law Woody Storck, along with his many nieces, nephews, and extended family. He is predeceased by his sister, Judi Storck. Wherever he is now, his family sincerely hopes that he is spending a sunny day on the links with some of his old friends and manages to birdie that last hole. A private burial is planned. In lieu of flowers, memorial contributions may be made to the Wildlands Conservancy, 3701 Orchid Place, Emmaus, PA 18049.

Thomas Joseph Lyons, known to his family and friends as Tucker, passed away peacefully at home on April 11, 2021 at 66 years of age. Tucker was born on January 20th, 1955 in Plainfield, NJ to the late Lucy and Joseph Lyons. He attended Farleigh... View Obituary & Service Information

The family of Thomas J. Lyons created this Life Tributes page to make it easy to share your memories.

Thomas Joseph Lyons, known to his family and friends as Tucker,...

Send flowers to the Lyons family.